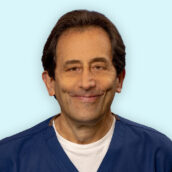 Steven G. Friedman, MD, MBA, is the Chief of the Division of Vascular Surgery. He received a BA degree from Queens College, of the City University of New York, in 1976, and he received the rarely-conferred degree, MD With Distinction in Research, from the University of Rochester School of Medicine and Dentistry, in 1980. Dr. Friedman received an MBA from the University of Massachusetts, Amherst, in 2011. Dr. Friedman completed a general surgical residency at the Brigham & Women’s Hospital of Harvard University, in 1985, and a vascular surgery fellowship at N.Y.U. Medical Center, in 1986. In 1996, Dr. Friedman founded and directed the North Shore University vascular surgery fellowship program in Manhasset, N.Y., and in 2001, he founded and directed the vascular surgery fellowship program for the Northwell Health System. Dr. Friedman was the Chairman of the Department of Surgery at N.Y. Presbyterian Lower Manhattan Hospital from 2004-2014, as well as the Chief Medical Officer from 2012-2014. He is the author of more than 80 scientific articles in peer-reviewed journals, numerous book chapters, the book, "A History of Vascular Surgery," and the short story, “Women at Work.” His work has also appeared in the N.Y. Times, New England Journal of Medicine, Midstream Magazine, Downtown Magazine, and the Blue Moon Literary & Art Review.

Dr. Friedman is a member of all of the major national and international vascular surgery societies and he is a distinguished member of the Society of Vascular Surgeons. Dr. Friedman is a past president of the New York Society of Vascular Surgery and he is Clinical Professor of Surgery at both the Weill Cornell Medical College and the Zucker School of Medicine at Hofstra/Northwell.

Friedman, SG. Fifty Shades of Grief or: A Father Drops His Daughter Off at College. The Cornell Daily Sun. 2013; October 29. http:cornellsun.comblog20131029guest-room-fifty-shades-of-grief-or-a-father-drops-his-daughter-off-at-college

Have you seen this provider in the last 3 years?